The eggs reach the laboratory

How do the eggs get to the Laboratory?

Following oocyte retrieval, the eggs surrounded by their cumulus cells are transferred to the laboratory in sterile tubes. They eggs are then identified using a microscope, cleaned and kept in culture medium in an incubator at 37ºC.

Are all the eggs collected in a given cycle of the same quality?

The quality of the eggs is a property that is unique to each woman and to each cycle. Therefore, not all the eggs obtained after retrieval are of the same quality. Usually, 80% of the oocytes are mature and the remaining 20% are immature. Immature eggs are usually not suitable for in vitro fertilisation.

When should the semen sample be collected?

Can a semen sample be frozen during the first visit? 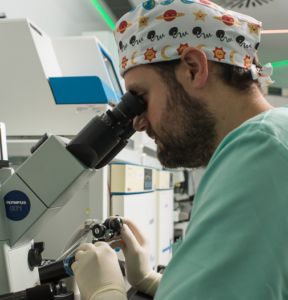 Yes. We strongly recommend to freeze a semen sample during the first visit. In this way, the couple will not have to come to our Center the day of the retrieval. Only when the embryos are ready to be transferred.

What procedure is followed when donor semen is required?

Our team will allocate a suitable sperm donor for the couple or, in its case, for a single woman or a lesbian couple. Frozen donor sperm samples are usually obtained from a sperm bank for our patients.
On the same day of the egg retrieval, the sperm from the selected donor will be processed for the IVF procedure.

Does the semen require any special preparation?

The egg and the sperm are introduced to each other: the fertilisation process

After several hours in culture, the eggs are brought into contact with the sperm in order to achieve fertilisation.

What does conventional In Vitro Fertilisation entail?

IVF is one of the most frequently used techniques in assisted reproduction. It consists of bringing the egg and the sperm together to ensure that both genomes combine. When the semen sample is normal and there is a history of earlier fertilisation, “conventional” insemination is performed. This consists in placing the eggs in contact with a specific concentration of processed sperm (one hundred thousand sperm with good motility) in culture medium and incubating them at 37ºC until fertilisation is observed.

How is introcytoplasmic sperm injection performed? When is it necessary?

When the sperm sample is of low quality or there is no prior history of fertilisation, the insemination technique used is IntraCytoplasmic Sperm Injection (ICSI).ICSI is a highly sophisticated technique, requiring a great degree of precision, expertise and experience by the embryologist. It is the introduction by injection of a “live” sperm into the cytoplasm of the egg.
In the case of the Egg Donor Programme, ICSI is absolutely necessary, regardless of the quality of the semen, in order to ensure a high rate of fertilisation.

Seventeen to twenty hours after insemination, the eggs are observed under an inverted microscope at 400x magnification to see whether or not fertilisation has occurred. A fertilized egg has two pronuclei: the female pronucleus and the male pronucleus. We can see eggs which have been correctly fertilized, eggs that did not fetilized and eggs which have fertilized in an anomalous way.

Do all eggs fertilize after in vitro fertilisation?

No. Under normal conditions, using sperm from the ejaculate, the rate of fertilisation both in IVF and IVF-ICSI is about 70%.
The first cycle of IVF can be considered as diagnostic and allows the medical staff to determine the couple’s level of fertility. In some cases, we can find low levels of fertilisation (5-20%) or even complete fertilisation failure.

Are chromosomal embryo abnormalities more frequent in IVF than in natural conception cycles?

Two days after in vitro fertilisation

What do we see two days after in vitro fertilisation?

Three days after in vitro fertilisation

What do the embryos look like three days after fertilisation?

The embryos must have doubled the number of cells they had on the second day. By the third day of culture, the embryos display between 7 to 9 blastomeres with different degree of fragmentation. Some embryos may become blocked and their development halt between the second and third day.

Are all embryos the same?

Just like people, no two embryos are exactly alike. Each one has its own genetic and morphological features. Not all the embryos from the same cycle display the same quality.
The embryos are carefully analyzed with an inverted microscope under 400x magnification and are classified on the basis of their morphological features (rate of cellular division, equal or unequal size of cells and percentage of cellular fragmentation).
The embryos are rated from 1 to 10, where 10 is an embryo with 4 equal-sized, unfragmented cells on the second day of culture and between 7 and 9 equal-sized, unfragmented cells on the third day.

What happens to the surplus embryos that are not transferred? Can they be frozen?

Yes, “surplus” embryos which are not transferred to the uterus, are cryopreserved in liquid nitrogen at -196ºC, provided that they are of good morphology. Otherwise, they will not be frozen and will be discarded.

How long can the embryos remain frozen and still be implanted later?

The surplus pre-embryos resulting from in vitro fertilisation techniques that are not transferred to the woman in a reproductive cycle can be cryopreserved in authorized banks. The cryopreservation of oocytes, ovarian tissue and surplus embryos can be extended until it is considered by the treating doctors, with the approval of independent and external specialists, that the recipient does not fulfil the clinical requirements to undergo the assisted reproduction technique.

What is the destiny of frozen embryos allowed by the legislation?