Fragmentation of the DNA of the sperm

What is spermatic DNA fragmentation and what is its significance?

Spermatic DNA fragmentation, as its name indicates, refers to breakage or lesions in the genetic material of the sperm.

The larger the number of lesions, the lower will be the integrity of the genetic material and the probabilities of producing a full-term pregnancy.

Can these DNA lesions be repaired?

In some cases the oocyte can repair the damage to the DNA of the sperm that has fertilised it. This will depend on various factors:

Is it possible that differences exist between one sample and another from the same patient?

Yes, the levels of DNA fragmentation can differ from one sample to another obtained one or several weeks later.

Is there any treatment that improves spermatic DNA fragmentation levels?

Some studies indicate that the treatment with antioxidants can significantly reduce the DNA fragmentation levels. Even so, there is the possibility that some patients do not respond to the treatment, especially when the DNA damage is induced by toxic factors or high temperatures that activate caspases and spermatic endonucleases. 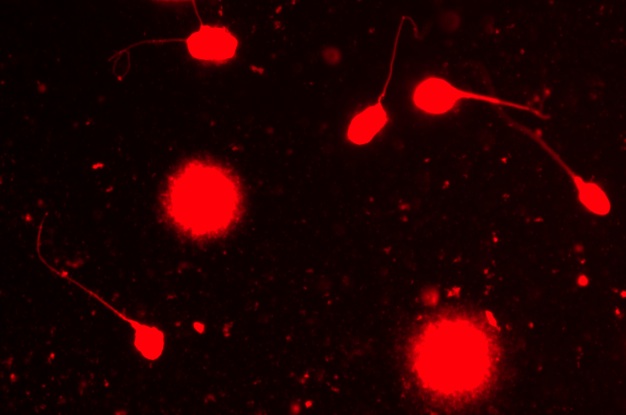 In these cases the recommended practice would be the use of sperm coming from the testicle, since it has already been observed that its degree of fragmentation is usually significantly less.

Differences between the seminogram and the test to detect fragmentation

Can a seminogram detect the lesions in the genetic material of sperm?

No, the seminogram evaluates other parameters of the semen sample such as the concentration of sperm, their motility or the morphology, but it does not take into account the integrity of the genetic material.

What causes damage in the DNA of the sperm?

The causes are several and can be intrinsic or induced by external factors.

The intrinsic factors include:

This maturation process entails nuclear chromatin packaging and the acquisition of the spermatic motility. If this process is not carried out correctly, lesions can occur in the spermatic DNA.

The external factors include:

How is spermatic DNA fragmentation detected?

There are various methods for measuring the fragmentation levels. In our centre we use the TUNEL test, which is the test recommended by opinion leaders in studies of DNA fragmentation.

The majority of the fragmentation tests, including the SCSA test and the SCD test, measure potential damage and susceptibility to the denaturalisation of the DNA and, therefore, they have a lower predictive level. On the contrary, the TUNEL test measures real damage and has a high predictive value in assisted reproduction techniques. Currently, the cut-off value of normality recommended by the TUNEL test is less than 15%. To conduct the TUNEL test, the sperm react with an enzyme and the sperm with fragmented DNA show either microscopic coloration of a clear field or fluorescence of a green colour if viewed through a fluorescence microscope.

In what cases is the spermatic DNA fragmentation test advised?

This test is recommended in the following cases:

How do we select the best sperm in cases of spermatic DNA fragmentation?

In cases of spermatic DNA fragmentation, when embarking on an In Vitro Fertilisation treatment, Institut Marquès uses the FERTILE® chip, the latest technology in sperm analysis, that allows choosing the best spermatozoon to ensure treatment success.