Endometriosis is a chronic disease that affects women. It can cause pain in the lower abdomen and difficulty with becoming pregnant.

Occurs when cells of a tissue called the endometrium, which lines the uterine cavity, grow outside it, developing in other organs. This tissue can rupture and cause bleeding, most commonly affecting the ovaries, fallopian tubes, and intestine.

Areas where endometriosis may be found

The parts most commonly affected are the ovaries, fallopian tubes, and intestine. It can develop in the front, back, and sides of the uterus. 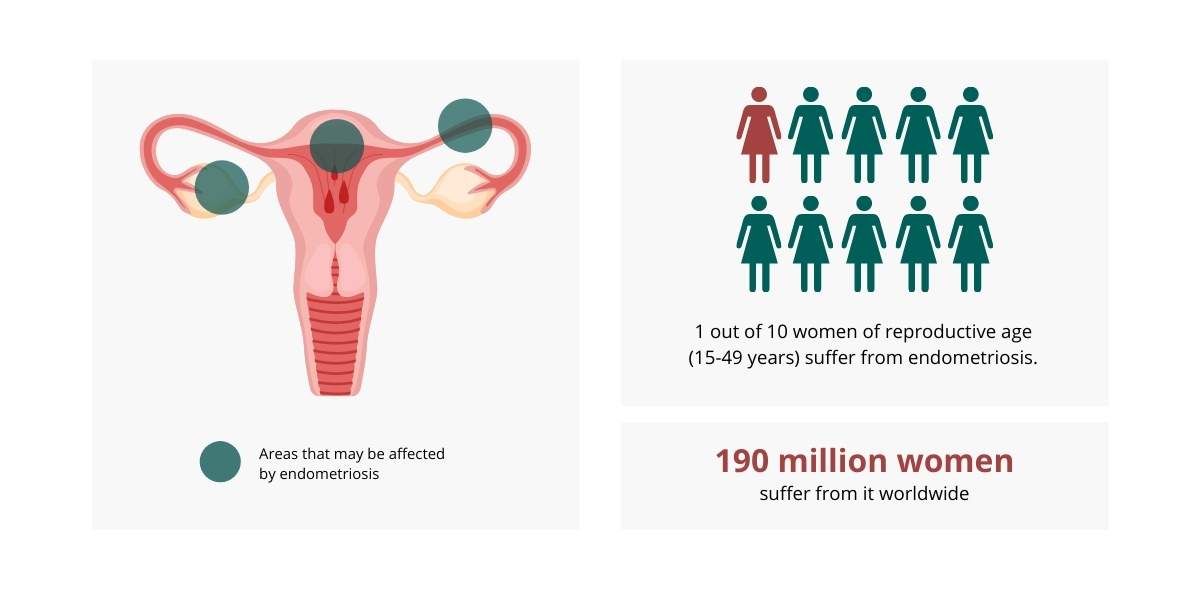 Some women have no symptoms, but most have lower abdominal pain in the following circumstances:

Other symptoms of endometriosis may include:

How is it diagnosed when there are no symptoms?

There is no test to detect it, but we may suspect it if we know your symptoms and perform a physical examination. In some cases, an imaging test (ultrasound or MRI) may be helpful.

The only way to know for sure if you have it is to perform surgery, look for endometriosis tissue outside the uterus, and send it for testing.

Is it a malignant disease? Can it cause cancer?

Endometriosis is a chronic, hormone (oestrogen)-dependent benign disease. It is associated with a slight increase in the risk of some types of ovarian cancer. This risk is significantly reduced with contraceptive treatment. No screening tests are recommended because the incidence is very low and there is no effective test.

In cases of deep endometriosis, several organs may be affected, such as the intestines, urinary tract, etc. This can lead to various symptoms such as pelvic pain, pain during bowel movements, etc. Surgery for endometriosis can be complex in these cases and therefore the risk of complications is higher. If endometriosis is very serious, it can affect neighbouring organs and cause serious kidney and intestinal problems.

The diagnosis of suspected endometriosis is based on the patient’s symptoms (chronic pelvic pain, menstrual pain, urinary and/or intestinal symptoms, difficulty in becoming pregnant), physical examination, and in some cases an imaging test (ultrasound, MRI) may be helpful. The only way to know for sure if you have endometriosis is to perform surgery, find endometriosis tissue outside the uterus, and send it for testing.

It may be due to a genetic predisposition. In 2021 it has been published that women carrying a variant in the NPSR1 gene are very likely to develop endometriosis. It is therefore a common disease in women of the same family. But it can also be caused by “retrograde menstruation”: when the uterus contracts to get rid of the period, fragments of endometrium can move upwards through the tubal openings. These fragments can then nestle in the fallopian tubes. Both causes have been proven to be possible.

Endometriosis can lead to impaired reproductive function and impaired fertility. It is the cause of infertility in 25% of our patients.

The mechanisms by which causes infertility are a matter of dispute and depend, in part, on the degree of severity of the disease.

How can symptoms be relieved?

Endometriosis can be treated in different ways. The right treatment for each woman depends on her symptoms and whether she wants to become pregnant in the future.

The medicines we use to treat it are:

In what cases should surgery be used and what are the consequences?

Surgery should be used in cases where chronic pelvic pain does not improve with medical treatment, when there are large endometriomas and when there are endometriosis implants that compromise the proper functioning of other organs such as the intestines, bladder, etc. Sometimes surgery is performed to improve the reproductive prognosis.

The sequelae that may result from surgery depend largely on which pelvic structures are affected and the stage of the disease. Chronic pain may persist, genitourinary and bowel injuries may occur as a result of surgery, or abdominal adhesions may be generated (certain tissues or organs stick together).

Can it be prevented?

Unfortunately, cannot be prevented. However, treatment with contraceptives or hormones that interrupt the menstrual period can slow the progression of the disease and alleviate its symptoms. We also know that in women with endometriosis who become pregnant the symptoms significantly improve.

What is the greatest advance in the treatment?

The most significant advance in recent years is that its surgical indications have become increasingly limited. This helps to preserve ovarian function and fertility in patients with endometriosis, as the surgery greatly affects the ovarian reserve.

There is still a long way to go to understand this disease and improve its treatment and prognosis.