According to the European Society of Fertility, the regular amount of sperm cells in an ejaculation (based on an average count) up to 1985 was of 100 million/cc. From 1986 forward, this number was reduced to 60 million/cc, and in 1992 and on, to 20 million/cc.

Institut Marquès started studying the quality of spanish males’ semen in 2003. First, men in Tarragona (study presented in the SEF congress, 2002), then in Barcelona and Coruña (study published in Reproductive Biomedicine) and, finally, in the whole spanish state (I National Study of Young Men’s Semen, published in Andrología and carried out in cooperation with 62 other reproduction centers).

In these studies, Institut Marquès’ investigation department, led by Dr. Marisa López-Teijón, indicates that the decline in male fertility may be due to environmental pollution. Thus, it varies accordingly to geographical variations. This is because of the common use of chemical substances known as endocrine disruptors: a long listing of compounds that act as estrogens in a woman’s organism and increase her levels of female hormone.

In a pregnant woman, this increase in estrogen levels may cause her to pass extremely high amounts of this hormone on to the embryo, and consequently affect the development of his testicles during the embryonal phase. Thus, the embryo’s fertility may be put to risk. This subject has been analyzed in another study about Endocrine Disruptors by Institut Marquès and CSIC in 2011, which relates to the poor quality of semen because of the chemicals transferred to the fetus during pregnancy. See press release.

Dr. López-Teijón, head of Assisted Reproduction at Institut Marquès, is a member of the team of experts in Endocrine Disruptors at the Vivo Sano Foundation, producer of the documentary “La letra pequeña” – Small Print – (watch video) which gathers her opinion and also those of other international specialists from different disciplines.

Through this organization, she gives advice on the effects of chemical substances on human reproduction with social initiatives such as the Pesticide Free Week or the publication of the book Hogar sin tóxicos (Toxic Free Home) by the journalist Carlos de Prada.

In 2010, Institut Marquès sponsored Spain in the North Pole Marathon with the aim of raising worldwide awareness of the effects of chemical pollution on male fertility. The athlete Luis Pallarés took part in the marathon dressed as a spermatozoid to protest against the fact that the Arctic has become the toxic landfill of the planet. More information. 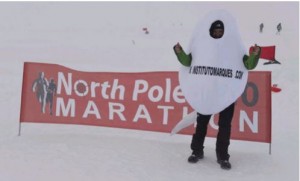 Nowadays, more and more experts come together to denounce the effects of chemical substances on reproductive and general health and demand for more attention set upon this issue, analyzed in different studies and possibly decisive for humanity’s future.