What are monogenic hereditary diseases?

Monogenic diseases are those caused by alterations in the DNA sequence of a single gene.

Genes are small DNA segments. They are arranged in order in the chromosomes, in the cell nucleus. Each cell has 23 pairs of chromosomes; two of them, the X and the Y, are the sex chromosomes and they determine sex; the rest are called autosomal.

All genes serve as a pattern for the production of different proteins and together they provide the information necessary for structuring the body and its functions. When one of them is abnormal, it may produce an abnormal protein or one in abnormal quantities that alters these functions.

Inherited abnormal traits do not always have consequences for health; sometimes, the consequences are minimal, but they may also cause alterations that lead to a major reduction in the quality of life. Hereditary diseases affect 1-2% of the general population.

How are they transmitted?

There are different inheritance patterns from one gene:

Autosomal dominant: A disease is said to be dominant when only one defective gene is needed to cause the symptoms of the disease. In these cases, the abnormalities usually appear in each generation and each child affected has a parent who is affected in the same way. People who are not affected do not transmit the disease. When one of the parents is affected, the child has a 50% probability of inheriting the disease. Furthermore, men and women have the same probability of suffering it.

Autosomal recessive: In these cases, although one of the genes from the pair is affected, the other may produce sufficient normal protein and so the abnormality is not clinically visible; these individuals will not suffer from the disease but will be carriers because they have the mutation and can transmit it to their children. Only individuals with the two copies of the affected gene will have the disease. 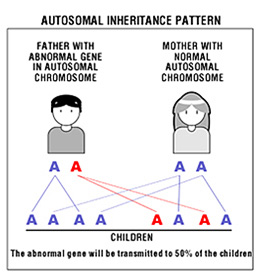 X-linked dominant: The dominant characters linked to the X chromosome are uncommon but they exist. They are manifested in women who only have one copy of the gene and in men who have the mutant gene in the only X chromosome they have. Both sons and daughters of an affected mother have a 50% chance of being affected. Males who are affected, however, only transmit the disease to their daughters; their children will be healthy.

X-linked recessive: In these cases, although the woman is a carrier of an abnormal gene, she will not suffer from the disease because the normal X chromosome will compensate the abnormality. On the other hand, any male who receives the abnormal X chromosome will suffer from the disease. Every son born to a woman who is a carrier of a recessive disease linked to the X chromosome has a 50% chance of inheriting the defective gene and therefore of developing the disease. Each of the daughters will have a 50% chance of inheriting the defective gene and being carriers of the disease. Carriers do not usually have any symptoms of the disease but they may have a child who is affected. A man affected by a disease linked to the X chromosome cannot transmit the disease to his sons because he gives them the Y chromosome but he will transmit it to all his daughters. For example: haemophilia. 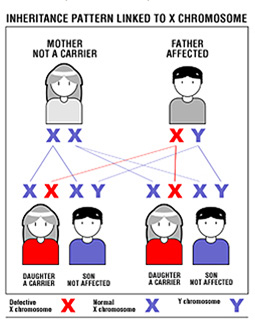 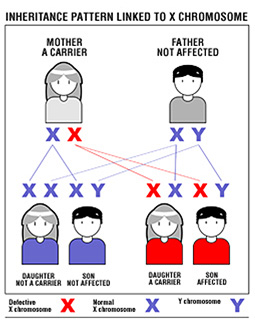 Which are the most common hereditary diseases?