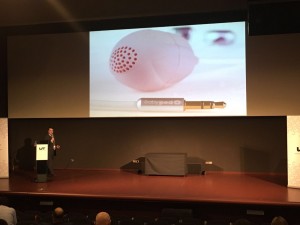 Dr Alex García-Faura, scientific director of IM, presented Babypod at the first Wearable Technologies Conference –world platform in innovation and development of technologies for the body.

The scientific director of Institut Marquès took part in the forum of new technologies for the body held during the Mobile World Congress.

Dr Alex García-Faura, scientific director of IM, presented Babypod at the first Wearable Technologies Conference –world platform in innovation and development of technologies for the body.

The event was held at the Centre de Cultura Contemporània de Barcelona (CCCB) during the Mobile World Congress, which is taking place in Barcelona.

During his presentation the doctor explained that “Babypod is an innovative device that allows pregnant women to talk to their babies, before they are born, using their smartphones”.

Babypod is inserted in the vagina like a tampon, it’s connected to the smartphone and emits music (maximum volume 54 decibels, i.e. normal tone of voice in conversation). Thanks to this device, the voice of the mother, or another person, can also reach the foetus.

The device has been scientifically tested before being commercialised, as it’s a device that has to be inserted in the body. These studies showed that the device is completely safe for both mother and baby.

The clinical trial carried out by Institut Marquès in more than 1.000 patients, showed that the foetus is able to hear from week 16 of gestation as long as the sound is transmitted from the mother’s vagina –the sound is barely audible when it comes from outside the mother’s body.

The study showed that foetuses respond to music transmitted intravaginally by moving their mouth and tongue as if they were trying to vocalise.

Babypod has different uses: rule out deafness and also improve the ultrasounds –as the movement of the foetus defines its structures.

The device also increases the wellbeing of the mother as she can share music with the baby before giving birth.