Our study on foetal hearing, most read article in science magazine Ultrasound (06/06/16) 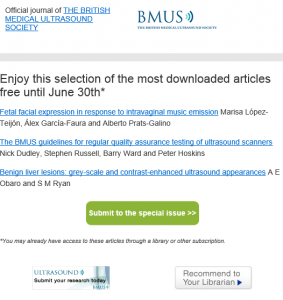 The science magazine Ultrasound announced in the latest newsletter our article Foetal facial expression in response to intravaginal music emission, published on September 2015, as the most read

Institut Marquès continues to consolidate as leading company in innovation, specially with our studies on the effects of music in the beginning of life.

The science magazine Ultrasound announced in the latest newsletter our article Foetal facial expression in response to intravaginal music emission, published on September 2015, as the most read. Ultrasound is one of the most prestigious medical magazines about Gynaecology and Obstetrics, so this news means great recognition in the scientific field.

Apart from this achievement in medical community, our study on foetal hearing has received an enormous repercussion in mass media. Images of the foetuses opening their mouth and sticking out their tongue have been seen all around the world.

With this study, carried out in more than 1000 patients, Institut Marqués discovered foetuses can hear from week 16 (measuring 11cm) as long as the sound reaches them through mother´s vagina.

It was found that when the sound reaches them from outside, for example, from the abdomen of the mother, they almost do not hear it. They perceive it as a whisper and in a distorted way. However, when we emit sound from inside the vagina using Babypod, foetuses reaction with mouth and tongue movements.

This discovery has important medical use. Babypod can open new lines of research on fetal hearing and deafness. It also facilitates ultrasounds, as by inducing foetal movements, it allows seeing all their structures more easily and scan time is shortened. Babypod is the only device that helps to communicate effectively with the foetus or can be used during pregnancy enabling pregnant women to verify the foetal well-being.

Besides, experts consider any type of sensory stimulation is good and better, when done earlier. Music stimulates language learning.

At Institut Marquès we are advancing in this line of research, comparing the reactions of foetuses to different types of music, and also to the voice of the mother or anyone who wants to communicate with the foetus.

How to improve the implantation with music

Alongside we have started another scientific study to analyse whether music can also improve embryo implantation. In this study for the moment we have noted that by using Babypod just after embryo transfer and during the days until the pregnancy test, patients have noticed that it has reduced their anxiety.

Previously, Institut Marquès discovered music increases In-Vitro Fertilisation rates by 5%. Following this study, published in 2015 in the Journal of Fertilization, all our incubators have a built-in music system.

Thus, music remains one of our added values as an international reference centre in Assisted Reproduction, where we give priority to health care based on excellence and innovation to improve treatments and well-being of our patients.