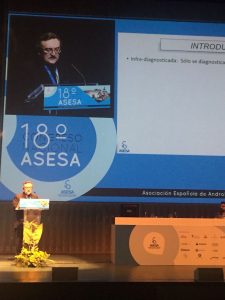 Dr. Ferran García, director of the Andrology service of Institut Marquès, has been appointed president of the Spanish Society of Andrology, Sexual and Reproductive Medicine (ASESA)

Dr. Ferran García, director of the Andrology service of Institut Marquès, has been appointed president of the Spanish Society of Andrology, Sexual and Reproductive Medicine (ASESA).

The appointment took place in the last congress of the scientific society, held in the city of Cartagena (Murcia). Dr. Ferran García states that “one of the main objectives of our mandate will be to have an important presence in scientific, academic, professional and media forums, based on the prestige and professional recognition of the representatives of the Society”

For this new mandate of 4 years, the head of Andrology in Institut Marquès also believes in “the respect and the collaboration with other relevant societies, putting in value the historical prestige of ASESA.”

ASESA was founded in 1980 and currently has 500 members. The Society has a multidisciplinary character and represents specialists who, from different perspectives, deal with some aspect related to the reproductive or sexual function of the male. Its main objectives are to encourage the study, exploration, investigation and analysis of any aspect that refers to the sexual and reproductive functions of men.

As director of Andrology of Institut Marquès, Dr. Ferran García has led different studies on the quality of semen in the Spanish population. In these studies it was found that sperm quality was worse in the more industrialized areas, mainly due to the effect of endocrine disruptors.