How does age affect fertility in men? 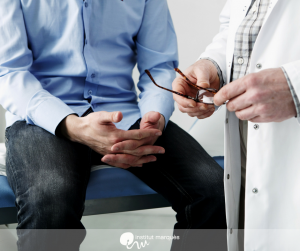 Is increasingly common for men over 45 years of age to wish to become parents. However, with the increase in age, also the quality of the sperm may declines, causing a decrease in natural fertility

Great figures of history like Chaplin, Picasso or Anthony Quinn were parents with more than 60 years. There is a general idea that the age of the male does not affect his reproductive capacity, or at least not in the same way as in the case of women, where age is a determining factor.

With the great social changes produced in the last decades, such as the delay of motherhood or the second relationship of older men with women without children, it is increasingly common for men over 45 years of age to wish to become parents. However, with the increase in age, also the quality of the sperm may declines, causing a decrease in natural fertility.

Moreover, the damage to genetic material contained in sperm also increases with age and this can be a cause of illness in children. Genetic studies in large populations have shown that children born to elderly parents have more abnormalities (autism, schizophrenia and other problems) than those born to young parents. To all this we must add the decrease in semen quality observed especially in industrialized countries.

What other factors influence the sperm quality?

The so-called endocrine disruptors, especially estrogenic disruptors, are some of the factors that intercede in the reproductive capacity of the male. They are chemicals substances synthesized by men in recent decades, commonly used in industry, agriculture, and at home, that in the human body act as oestrogens.

In a pregnant woman, the increase in her oestrogen level may also affect the embryo levels of this hormone, which can endanger the development of the testicles during the embryonic stage and may lead to fertility problems, among others.

Institut Marquès has carried out several studies on the semen quality of Spanish males. In these investigations it was observed that the seminal quality was lower in the more industrialized cities: In Tarragona worse than in Barcelona, and in Barcelona worse than in La Coruña. Subsequently, in another study with samples from all over Spain, it was seen that more than half of the young Spanish males have a sperm quality inferior to what the WHO considers normal.

Even so, as Dr. Ferran Garcia, Head of Andrology at Institut Marquès explains, “We should not think that our species is in danger of extinction due to the decrease in the seminal quality of males. Moreover, nowadays there are reproduction techniques such as intracytoplasmic sperm microinjection or ICSI in which only a viable spermatozoon is needed to be able to fertilize the egg. Therefore, to become a biological father, millions of spermatozoa are not necessary, at least in assisted reproduction“.

Dr. Ferran Garcia adds: “this is especially true when we use young women’s eggs because they have the ability to repair some of the sperm abnormalities (DNA abnormalities). In contrast, the eggs of women over 38 years of age have decreased or lost this repairing ability“.

There are other factors that can affect male fertility, such as medical history (certain congenital malformations that affect the genitals, sexually transmitted diseases, varicocele, or poor pubertal development, among others).

The intense heat can also affect the quality of the semen and its reproductive capacity, as long as it occurs in a very continuous way. Several studies have shown that some professions that require working at a high temperature can lead to a reduction of spermatozoa. However, fortunately, the organism has its own mechanism of self-regulation in case of being exposed to a temperature raise produced in a short period of time.