The challenge of becoming a mother after overcoming breast cancer 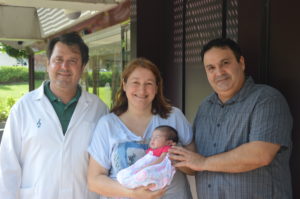 When a patient is diagnosed with cancer the possibility of becoming a mother is often excluded when, actually, just as science moves forward and beats the illness, assisted reproduction also makes a pregnancy possible once the treatment has been completed. Such is the testimony of Elena, happy carrying her baby Paula

When a patient is diagnosed with cancer the possibility of becoming a mother is often excluded when, actually, just as science moves forward and beats the illness, assisted reproduction also makes a pregnancy possible once the treatment has been completed. Such is the testimony of Elena, happy carrying her baby Paula.

At only 14 days of age, Paula has left home for the first time. Her parents have taken her to Institut Marquès in order to introduce her to Dr Alex García Faura, Director of the Oncology and Reproductive Medicine Unit and responsible physician for the treatment thanks to which Paula was born, less than two weeks ago. “We were thrilled to introduce Paula to Dr García Faura”- tells Elena, her mother.

The overcoming story of the new mother has touched the whole team at the clinic. She came to Institut Marquès thanks to the Baby Beatles association after winning the battle against breast cancer, diagnosed when she was 30 years old. In order to overcome the illness she underwent treatments that involved adverse effects on her fertility.

However, she did not lose her desire to start a family. When she was declared fit at the age of 40, Paula’s mom started a new battle for maternity. “I am a primary school and children’s education teacher. I love children and I have always wanted to be a mother. So, my dream was shattered for a long time”, notes with emotion.

“I faced two unsuccessful attempts of becoming pregnant in other clinics. However, I never gave up… At that point, Institut Marquès appeared. The experience there could not have been better, both the medical care and the treatment received. In only a couple of months, we finally succeeded. It has been like a miracle”, recalls Elena with satisfaction.

Elena recommends other patients with breast cancer wishing to become mothers not to give up: “To those women that face situations like mine I would tell them not to give up; they are not alone and the fight is worth it”. 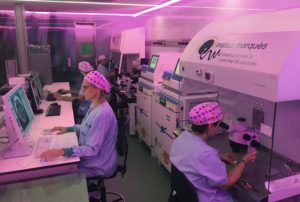 Today, Breast Cancer Awareness Day, our clinics have gone pink as a message of hope: it is possible to become a mother after overcoming cancer.