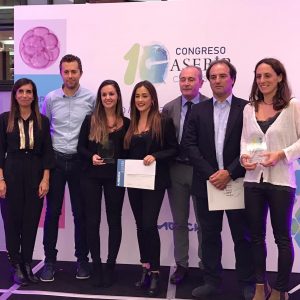 At the 10th Congress of the Spanish Association for the study of Reproductive Biology (Asebir) the study “Embryos able to exclude multinucleated cells during blastulation increase their reproductive potential” has received the Asebir Award 2019.

The study is part of a research line started by Institut Marquès. Thanks to it, the selection criteria of some of the embryos that do not follow normal evolution patterns are changed. These, as it has been shown, can end up becoming a healthy baby.

In IVF treatments, embryos are classified according to guidelines based on their appearance and the way they develop. In this way, the ones that are considered with a better prognosis to implant and continue evolving are transferred to the patient.

Researchers of this Assisted Reproduction Centre in Barcelona showed at the last Congress of the European Society of Human Reproduction, that was held some months ago, that embryos that are able to reabsorb their own altered cells on their second or third day of life are actually self-repairing, hence they can correctly evolve. Now they have proved at the Asebir meeting that it is being held in Cáceres, that some embryos that were considered disposable because of their several nuclei (multinucleated) have actually, the ability to remove the anomalous cells in the 4th or 5th day of life and end up leading to a pregnancy. This scientific contribution has been awarded with the ASEBIR Prize 2019.

Life does consist in being able to correct one’s defects

“Finding out that the human being, in its second or third day of life is already capable to determine that one of its cells has been altered and that it has the potential to remove it and keep growing in a healthy way is an amazing thing”, explains Dr Marisa López- Teijón, Manager of Institut Marquès. “This proves that life doesn’t consist in being born perfect, but in being able to correct one’s defects. Not only those which seem perfect manage to live, but also those who have fought to be perfect”, adds the renowned gynaecologist.

This discovery has been possible thanks to Embryoscope, an embryo incubator that has a video camera attached that films the development of the embryos. In this way, it is possible to observe them in continuously without endangering them. In order to carry out this study, the development of 23340 embryos was analysed, from the fertilisation moment to their 5th day of development.