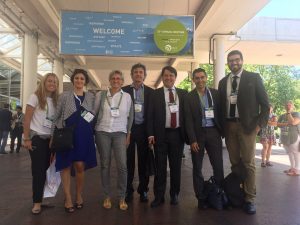 Thanks to the Embryomobile our patients can access their embryos via a Smartphone application directly connected to the Embryoscope, a high tech incubator equipped with a camera that replicates pictures of the embryos during their development process

The wait that follows the In-vitro-fertilization and the selection of the best embryo for the transfer can be a difficult moment for the couple and causes some anxiety during the fertility treatment. Institut Marquès offers patients the possibility to follow live through the Internet the development of their embryos, which were placed in an incubator for a few days.

Thanks to the Embryomobile our patients can access their embryos via a Smartphone application directly connected to the Embryoscope, a high tech incubator equipped with a camera that replicates pictures of the embryos during their development process. Patients can log in to the app whenever, wherever and as often as they want, whether it is from their home desktop computer or their Smartphone. Our study showed that the mobile app comforted the majority of our patients and reduced visibly their stress and anxiety levels.

Acknowledgements of the European Society of Human Reproduction and Embryology (ESHRE)

Our medical team was present at the yearly congress of the European Society of Human Reproduction and Embryology, which was held in Geneva, and used this opportunity to present the results of their study on the Embryomobile. Thanks to 400 patients from all over the World, we could determine that the monitoring of the embryos from any given place and time reassured 91% of the patients during the embryonic development period.

Dr Federica Moffa, gynaecologist at the Institut Marquès, asserts “the Embryomobile was very well received by patients, giving them the opportunity to implicate themselves in the process and helping them create a first emotional bond with their future child. It’s like if they had direct access to the lab from home. A great example of transparency of our way of working”.

Many of our patients have used the Embryomobile, and more than once. The number of users exceeds 3000, 400 of them participated in our study – 43% assert that they used the app more than 5 times a day, 27% logged in about 2 to 4 times, 23% only once a day. More than the half (51%) felt as if they were in the embryologist’s and lab expert’s shoes, and able to choose the embryo which would lead to a pregnancy. 74% of them were actually able of picking the correct embryo that would eventually lead to a transfer or vitrification.