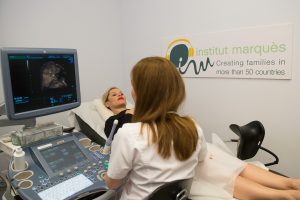 Institut Marquès offers the innovative: 4D ultrasound with music using the device Babypod. This device, which is inserted like a tampon and plays music, was developed by Institut Marquès for a scientific study that showed that the foetus is able to hear, the same way as we do, from week 16 of gestation, as long as the sound is transmitted from the mother’s vagina. The study showed that foetuses respond to music transmitted intravaginally by moving their mouth and tongue as if they were trying to vocalise.

The singer Soraya Arnelas experienced it during a consultation at Institut Marquès. She did an ultrasound with music in our centre and enjoyed the reaction of her baby, who responded to the music by moving her mouth and tongue.

The well-known artist was very emotional during the ultrasound, as you can see in this video published by the media: “to realise that the embryo can hear the same as you, and to see her reaction to the music creates a real bond between mother and daughter. It is incredible to see how it responds to music before being born.”

Women can use Babypod at home during pregnancy to communicate daily with their babies and also use it during the ultrasounds.
According to our research, the use of this device has important medical applications. Dr Marisa López-Teijón, director of Institut Marquès, explains that “gynaecologists were used to see the embryos inactive, measured them and observed them, but now, with the ultrasound with music we can wake them up and see a reaction. This facilitates the observation of the babies’ structures and it shortens the exploration time.”

At Institut Marquès we’ve a very important line of research on the effect of music and foetal stimulation in assisted reproduction. Our studies have already shown that music vibrations increase the success rate of in vitro fertilisation by 5%. For this reason, all the incubators in our centres already have an incorporated music system.