Dr. López-Teijón and Dr. Garcia-Faura present their research on music at universities in the Ig Nobel Tour 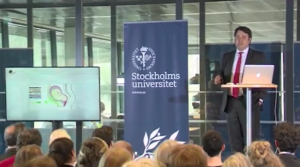 Dr. Marisa López-Teijón, Director of Institut Marquès, and Dr. Àlex Garcia-Faura, its Scientific Director have presented the research on the effects of music at the beginning of life

A few days ago, Dr. Marisa López-Teijón, Director of Institut Marquès, and Dr. Àlex Garcia-Faura, its Scientific Director, have been in Europe. They have presented the research on the effects of music at the beginning of life. As part of the European Ig Nobel Tour, both doctors offered lectures at universities in Sweden and Denmark. In the Karolinska Institut in Stockholm and the Aarhus University in Copenhagen.

For years, Institut Marquès has been carrying out studies on the effect of music during embryonic and foetal development that have brought us numerous international awards. Last September Dr. López-Teijón received the Ig Nobel Prize in the category of Medicine. The objective of these awards is for prestigious scientists from all over the world to present their research to the public in a fun and entertaining way. This year, the organization has chosen our researchers to present their work at the Ig Nobel Tour.

Dr. López-Teijón and Dr. Garcia Faura delighted lovers of scientific dissemination by refuting one of the most accepted false myths among pregnant women: “Thanks to the creation of a vaginal loudspeaker, Babypod, we have shown that foetuses can hear from 16th week onwards when they measure 11 centimetres only if the sound reaches them directly from the vagina”, explained Dr. López-Teijon. She says that foetuses can barely hear the noise from outside.

The Director of Institut Marquès also said: “with our scientific research we have improved In Vitro Fertilisation. We have applied musical vibrations in the incubators of our assisted reproduction clinics”.

Thousands of people attended the speech in Copenhagen

One of the most crowded events in the Ig Nobel Tour this year took place in the Aarhus University auditorium (Denmark). Nearly 800 people attended the presentation and other hundreds of people followed it in streaming from one of the 50 points enabled for the connection.

Communication with the foetus is one of the aspects that aroused most interest among the audience: “by inserting a loudspeaker into the vagina of thousands of patients, for the first time we have managed to communicate with the foetus”, said Dr. Garcia-Faura, with reference to Babypod. “This small device connects to the mobile phone and has allowed us to discover that the foetus responds in the same way as a baby, with speech and movement”, added the Scientific Director of Institut Marquès. He also said: “thousands of women are already using it to communicate with their babies during pregnancy”.

According to research by the Institut Marquès, we can now communicate with the foetus and stimulate it neurologically. Music activates language learning, and as has been demonstrated, this learning can begin in the womb.