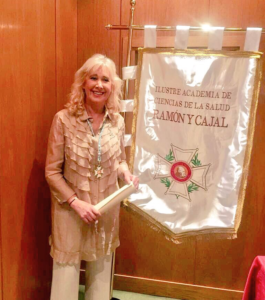 On the occasion of the ESHRE Annual meeting, last Saturday, 30th of June, the Director of Institut Marquès, Dr Marisa López- Teijón was named a full member by the “Ilustre Academia de Ciencias de la Salud Ramón y Cajal”. During the event, held at the Faculty of Medicine of the Complutense University in Madrid, she was also awarded the “Cordón y Pin Académico”. This award acknowledges the accomplishments during her professional career in the field of Assisted Reproduction.

The “Ilustre Academia de Ciencias de la Salud Ramón y Cajal” highlighted the work of the Director of Institut Marquès in the field of scientific research and innovation:

“Dr Marisa López-Teijón Pérez. Degree in Medicine by the University of Santiago with outstanding qualifications. Member of the board of directors of the Spanish Society of Gynecology. Director of the Institut Marquès, leading international centre in Assisted Reproduction based in several countries. According to the scientific platform Research Gate, in 2018 she belongs to the 10% most relevant scientists in the world.

Thanks to her work:

In this edition, Dr. López-Teijón was awarded in the specialty of Gynaecology. The event was attended by prominent names of the scientific and medical community of our country.