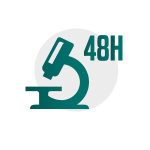 PGT Express: Very few clinics have the possibility to offer their patients a genetic study of their embryos in 48 hours. By means of Express IVF-PGT, at Institut Marquès we can perform the embryo biopsy and the analysis of all its chromosomes when the embryo is three days old. This way, the transfer can take place only two days later, when it reaches the blastocyst stage (fifth day of life), in a fresh cycle. With no need of freezing it and no waiting times.

How is Preimplantation Genetic Test performed?

The transfer is made immediately after the analysis, usually 4 or 5 days after the recovery of the ovules.

Can the embryo be damaged by extracting a cell?

At the moment in which the biopsy is carried out, each cell of the embryo contains all the genetic information, the extraction of one cell does not affect the correct development of the rest of the cells of the embryo.

This technique requires great precision, performed by experts does not alter the evolution of the embryo. The risk of embryonic block is 0.67%.

What types of Preimplantation Genetic Test (PGT) can be performed?

You can basically perform three types of PGT:

Do you want more information about the Preimplantation Genetic Test? Do you have doubts about what type of PGT you should perform?

You can contact us and we will inform you