Institut Marquès at the Ig Nobel Prize Exhibition in Tokyo 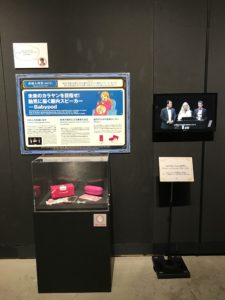 The organising committee of the Ig Nobel Prize has chosen Institut Marquès, winner of the Obstetrics Ig Nobel 2017, to be present in the exhibition “Ig Nobel Prize Exhibition” that is being held at the Aamo Gallery in Tokyo until November the 4th

The organising committee of the Ig Nobel Prize has chosen Institut Marquès, winner of the Obstetrics Ig Nobel 2017, to be present in the exhibition “Ig Nobel Prize Exhibition” that is being held at the Aamo Gallery in Tokyo until November the 4th.

Ig Nobel has sought to highlight the research carried out during the last years by Institut Marquès on the effects of music at the beginning of life and the development of Babypod, an intravaginal speaker that allows communicating with the baby during pregnancy.

Specifically, the exhibition highlights the studies of Institut Marquès, which prove that fetuses can hear from week 16, when they only measure 11 centimetres, if the sound comes directly from the vagina. When the sound comes from outside, a part of it is reflected on the outside and the rest of it stays absorbed and distorted by the soft tissues that make up the abdominal and uterine wall, so that the fetus can only hear a bit of the transmitted sound, with less intensity and clarity than that of the point of emission. According to the research from Institut Marquès, the myth of speaking to the baby through the mother’s belly is over. The best way to communicate with the fetus and stimulate it neurologically is vaginal. Furthermore, according to the investigation, music activates the learning of language.

There is a showcase in the exhibition dedicated to the Obstetrics Ig Nobel 2017 where the Babypod, the only device that has proved to stimulate the vocalisation of the baby with music before being born, is also displayed. Approved by the FDA, the device is available online all over the world, so that pregnant women can use it at home and carry it with them to the ultrasounds in order to see the reaction of the fetus.

Furthermore, there has been a projection of images of the moment when the team from Institut Marquès received the award at the University of Harvard, as well as of the different presentations carried out before the scientific community on the Ig Nobel Tour. The aim of the Ig Nobel Tour is that recognised scientists present their research to the public in a funny and enjoyable way.