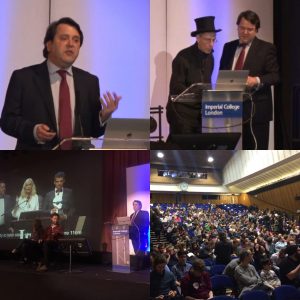 Music, applications, telemedicine and virtual reality are the research axes of the fertility centre

More than 700 scientists gathered at the Imperial College, a prestigious London University, to learn about the results of Institut Marquès’ research. Dr Àlex García-Faura, Scientific Director of the clinic, explained to the attendees the latest advances of the renowned assisted reproduction clinic, focusing on music, applications, telemedicine and virtual reality.

Pioneer in the study of the effects of music at the beginning of life, Institut Marquès has proven that fetuses hear from the 16th week of pregnancy if the outside sounds come directly from the vagina of their mother. For this purpose, the scientific team, led by Dr. Marisa López-Teijón, has created the intravaginal speaker Babypod, already used by thousands of women. An invention with which he won the Ig Nobel Obstetrics Prize an now it has been presented in England.

An additional innovation in the musical field has been the live concerts. Artists as singer Sharon Corr have performed for the embryos in its centres, where all incubators have music inside them. According to the research carried out in the laboratories of Institut Marquès, music improves a 5% the fertilisation rates of IVF treatments.

The mobile has also contributed to improve the results in assisted reproduction. The app Embryomobile, developed by Institut Marquès, allows parents a real time follow-up of their embryos while they are in the incubator from any location. Institut Marquès is the only fertility clinic that allows its patients to really see how their embryos evolve.