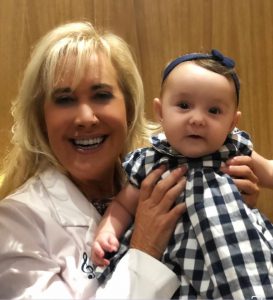 A few days ago, the Irish artist Sharon Corr met Alison, one of the babies that was developing in the incubators of Institut Marquès during the embryo concert that she played together with Álex Ubago a year and a half ago

A few days ago, the Irish artist Sharon Corr met Alison, one of the babies that was developing in the incubators of Institut Marquès during the embryo concert that she played together with Álex Ubago a year and a half ago. The meeting was very emotional and the violinist could sing for the second time to the little girl. The parents of the babies who were present at the embryo concert confirm that their children show an attachment to music already in their first months of life, as well as the calming effect it has on them.

“Getting to meet the babies born from these embryos would be wonderful, it would make me so happy”. Those were the words spoken by The Corrs’ celebrated violinist Sharon Corr barely a year and a half ago when she and Álex Ubago held a concert together in the laboratories of Institut Marquès for an unusual audience: hundreds of embryos that were then developing in their incubators.

Sometimes dreams come true. Time has gone by and many of those embryos are now some months old very healthy babies of different nationalities: Irish, Spanish, Italian, English, Chinese, Romanian, etc. And one of them has had the privilege of repeating encounter, this time in a different way and in a different location, with the Irish artist. We are talking about Alison, a baby girl who lives in Spain and who happens to be one of Sharon Corr’s youngest fans. The singer has been very excited during the meeting: “It has been a very special moment. Singing to the embryos was a magical experience and being part of the lives of these children from before their birth was an honour. Music brings us together and is the best way to communicate. I felt a special connection when I was able to hold Alison in my arms.”

Those parents whose children were born after that concert have not been surprised at all by the attachment to music shown by their babies coinciding with their first steps. Also in the case of Alison; her mother, Alina, says “she loves that we sing to her. If we don’t do it, she sings alone and she is not even nine months old yet! She claps, dances and communicates very well; she even tries to say a few words, something very early for her age”.

There are cases in which the musical pieces listened to during pregnancy have a calming effect that immediately stops tantrums. Many of those parents kept on playing music to their babies during pregnancy using Babypod, a small intravaginal speaker. “Sharon Corr will be one of their favourite singers when she grows up”, their parents agree.

Institut Marquès, world reference centre in Assisted Reproduction, hosted its last live embryo concert in 2018 in its laboratory in Barcelona. Sharon Corr and Álex Ubago performed exclusively for hundreds of embryos that were growing up in the incubators, not only for those in the Barcelona but, thanks to streaming, also for the ones in other locations (Clane in Ireland and Villa Salaria in Rome). Little Alison was one of them.

Studies carried out by Institut Marquès show that music vibrations increase the fertilisation rate of IVF cycles by 5% and improve the embryonic development. For this reason, the centre has created an innovative method that implements music in all embryo incubators.

The CEO of Institut Marquès, Dr Marisa López-Teijón explains that “music is the most ancient form of communication among human beings. Communication through sounds, gestures and dances preceded spoken language. The first language was musical rather than verbal and it remains so. Instinctively we keep talking to babies with high pitch and melody because we know it’s how they best understand us”.

Institut Marquès concerts for embryos, unique in the world, are framed in the centre’s work on the benefits of music in foetal and embryo development. These studies were recognised by the University of Harvard with the Ig Nobel Prize in Obstetrics, an award that meant a recognition to the research, development and innovation work that Institut Marquès carries out to improve the treatments.

Can we help you?