Life is better with music, In Vitro Fertilisation too 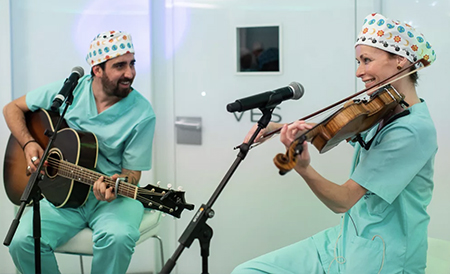 Institut Marquès has been recognised internationally for its studies on the effects of music in the beginning of life. Our discoveries have gone around the world and have been presented at the most important congresses on reproductive medicine and also at universities and research centres such as the Massachusetts Institute of Technology in Cambridge or the Imperial College in London.

Music improves the results of In Vitro Fertilisation

We use music in all the steps of our assisted reproduction treatments. Thanks to this, we have shown that embryos that develop with music improve their fertilisation rate by 5%. Therefore, there is always music inside all of our incubators: the micro vibrations stir the culture media, produce a homogeneous distribution of the nutrients and disperse the impurities. By doing so, we reproduce the movement that embryos would have if they were in the womb.

As a result of this discovery, artists from all over the world have been interested in our research, participating in it and even playing live for our embryos in the laboratory. Antonio Orozco, Sharon Corr and Álex Ubago are some of them.

We want to celebrate World Music Day with you by sharing the concert that Sharon Corr and Álex Ubago offered for the embryos at Institut Marquès’ laboratories.

Music can also help during pregnancy: Thanks to the development of a small intravaginal loudspeaker, Babypod, at Institut Marquès we studied the response to music of babies from the 16th week of gestation onwards. Thanks to these studies, we can already communicate with the baby before birth.