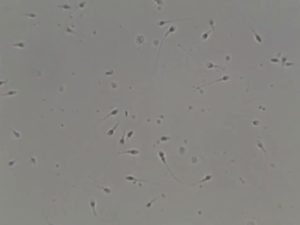 As experts in andrology, many patients ask us about the way spermatozoa work and we have summarised it in three questions

The sperm is the masculine gamete which function is to create a zygote after fusing with the core of the feminine gamete, the egg.

As experts in andrology, many patients ask us about the way spermatozoa work and we have summarised it in three questions:

The World Health Organization (WHO) sets the normal sperm concentration on 15 million of sperm cells for each millilitre of ejaculated.

According to scientific studies carried out by Institut Marquès, the decline of male fertility comes mainly from industrial pollution. The influence of the endocrine disruptors coming from the food chain, especially in industrialised areas, make pregnant women pass on high levels of oestrogens to the male foetus, affecting the development of the foetal testicle and, therefore, the semen quality.

Unlike women, who have a limited number of eggs from birth, men can produce new spermatozoa during all their life, hence they preserve their fertility. Over time, however, the degree of DNA fragmentation can increase causing infertility or repeated miscarriages.

In order to choose the healthier spermatozoa, Institut Marquès has the latest technology in sperm analysis, the Fertile® chip, a device patented by the Harvard University Medical School & Massachusetts Institute of Technology (MIT) that simulates the path the spermatozoa travel through the female genital tract with the aim to select the healthiest spermatozoa with the best morphology.

The “journey” of the spermatozoa until they reach the egg is complex. The path covers a distance of approximately twenty centimetres and lasts an average of one hour until it reaches the uterus. The speed each sperm cell reaches depends on its morphology, especially on the flagellum, the long tail that makes it mobile. How do they find their way and get to reach and fertilise the egg? Thanks to the female reproductive system that leads them all through the way both chemically – attracted by oxytocin- and mechanically, thanks to the contractions of the uterus.

Within assisted reproduction, fertilising the eggs can be made using two techniques, depending on a prior analysis carried out of each patient:

The first one is the conventional In-Vitro Fertilisation: the procedure consists in inseminating each oocyte with some 100.000 mobile spermatozoa so that one of them, randomly, gets through its membrane.

Instead, by using the second technique, the so-called Intracytoplasmic Sperm Injection (ICSI), an only sperm cell is injected directly into the cytoplasm of an egg. How to choose the best sperm cell? At Institut Marquès we use a technique called IMSI, which allows to see the male gametes at a magnification of x16.000 and select the most adequate to fertilise the egg via microinjection (ICSI).

Did you know that…

…the biggest spermatozoa in the world is that of the tiny fruit fly?